Another day, another drip cake, this time a triple drip, ombre, piñata cake, because why make anything easy for yourself? Though actually, this cake was a lot of fun to make, though it was commissioned for a friend of a friend’s birthday, so I only know through word of mouth that it also tasted good! This was the final product, carry on reading below to find out how to make it 🙂

So to start off, I doubled a Victoria sponge recipe to make four 8″ cakes. I wanted the inside of the cake to be ombre too, so I divided the mixture into four bowls (make sure

you weigh your mixing bowl before starting so that you can calculate how much your mixture weighs, and then how much mixture should be in each cake), and coloured each on with different amounts of pink gel dye, leaving one without dye.

After baking and cooling, I stacked the cakes with the lightest at the bottom to match the ombre on the outside. Between each layer I put a vanilla buttercream and raspberry jam. As this was a piñata cake, I removed a circle from the middle two cakes, and filled this in with pink and green smarties. After stacking the cakes I crumb-coated it all in white buttercream.

I made more vanilla buttercream and separated it into multiple bowls and added differing amounts of pink food gel dye to each to create a range of shades of pink. First off I coated the cake in white icing then added pale pink to the top, and gradually added dark shades of pink, blending it all together with a palette knife.

I covered the top of the cake in the darkest shade of buttercream.

One reflection I would say the ombre buttercream could have done with being thicker as the white portion was slightly see-through, and you could make out a bit of cake. If it had all been spread slightly thicker, I think this would have been avoided. 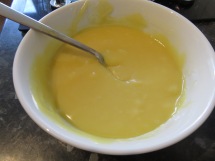 Traditional ganache was too yellow!

For the drips, I first made a traditional ganache with white chocolate and cream, but this proved to be very yellow, and was not going to work with the pink and white aesthetic of the cake (please let me know if you have any tips on making an actually white real ganache!).

As a compromise I made a simple glace icing with icing sugar and water, adding enough water to make it a drippable consistency. Once more I separated into three bowls, and added pink food dye to make three different shades.

I used a spoon to first drip the white all round the edge of the cake, using different amounts to create different drips. I then did the middle pink all round the edge, trying to ensure it was in the gaps in white drips. Finally I added the darkest pink icing, and also covered the whole top of the cake in this one. 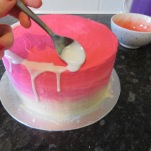 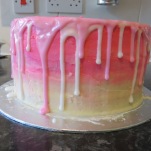 It was then onto decoration.

To decorate the top you could go fancier and make some of your own meringues or macarons but I kept it more low effort and bought some shop made mini meringues for the main focus of the decoration. I also got:

For arrangement I tried to create some 3D structure by building an off-centre main pile to create of focus and then having some flyaway bits of the smaller items. Play it by ear, have fun, and keep just taking a step back to see what it looks like. I would say that this cake definitely has a ‘front’, so make sure you decide which angle of the buttercream you think looks neatest before starting decorating, so you can then make that side the front. 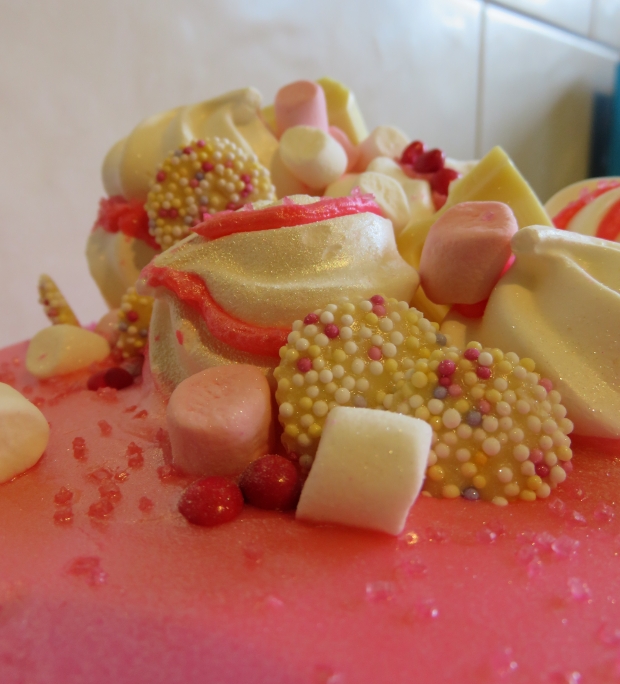 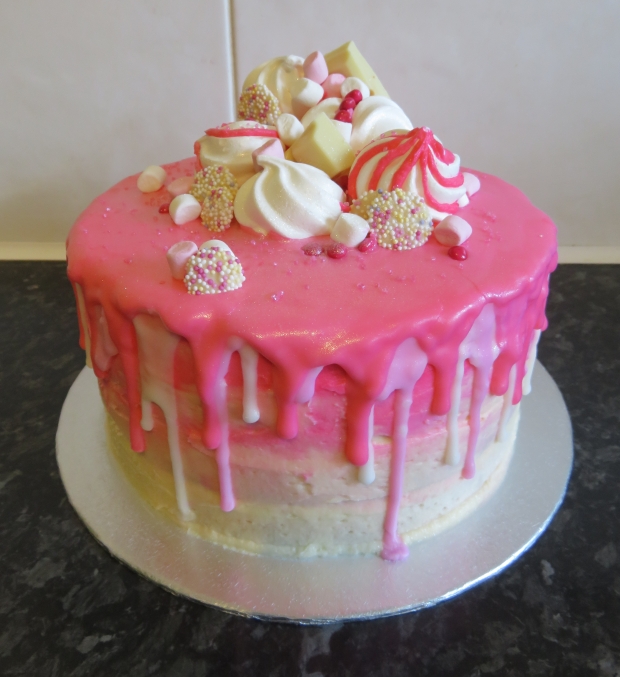 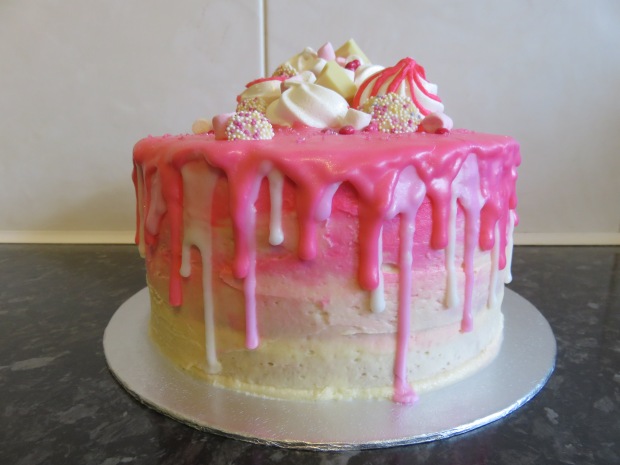