Yesterday I had my first solo mahoosive cake making session. (Obviously I do bake regularly but not quite to this extent…)

It was our summer ball on Tuesday and after getting into bed at 7am following a well-deserved hog roast and making it to the survivor’s photo, I decided there was not much I could do with my day apart from baking and eating some form of hangover cake. 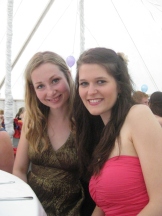 Jubilee Strawberries have launched a competition in which you have to design and make a strawberry cake. What better way to spend a quiet day in? (Or perhaps afternoon seeing as i did, admittedly, wake up at 2pm… standard student life). I decided to base mine around the classic, chocolate and strawberry combination.

To begin I made a standard Chocolate Sponge using the BBC Easy Chocolate Sponge recipe. I halved the recipe to make just one. It really was as it said – easy. Unfortunately, my budget cake tins from Wilkinson were nearly not up to the job. Although cake tins with a removable base are a great invention, they only work if they are completely sealed. Note how on instruction 3 it says “The cake mixture will now be very liquid”, well that is completely true. So liquid in fact that it started to flow right out of the bottom of the tin and make a nice mini cake on the bottom of the oven floor. However, the majority of the cake did stay in the tin but I would recommend, if you have the same problem, putting a baking tray on the oven floor to catch any drips. It makes cleaning much easier. 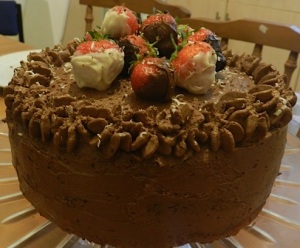 While the chocolate sponge was cooking, I whipped together a classic Victoria sponge. Again I used a BBC recipe (it is one of my favourite sites and I can while away hours supposed to be spent writing essays, researching the next cake to bake or meal for my housemates!) To the sponge mix I added about 2 handfuls of chopped strawberries that I tossed in flour and some red food colouring (although next time I would add more). If you don’t have fresh strawberries, you could try adding a few tablespoons of strawberry jam, as much as you can without the mixture becoming too runny or sweet. I made the full quantity of this cake and divided it between two tins.

While all this was in the oven, I set about on some decorations.

First I made a chocolate ganache:
Boil 200ml of Double Cream and then pour on top of 200 grams of chopped/broken up chocolate (I used a mixture of milk and dark).
I also dipped 15 strawberries in milk, white and dark chocolate to adorn the top of the cake when it was finally assembled.

The chocolate ganache was rather runny so I put it in the fridge. While it did get stiffer, I was not convinced it would stick to the cake very well and while it might have eventually thickened, I got impatient and decided to whip it. I did this with an electric whisk as you would when whipping cream for a pavlova (or any dessert). This turned out to be an excellent idea because it increased in volume (I wasn’t actually sure I had enough…) and was spreadable. My only disappointment was that it lightened in colour slightly so was no longer shiny and dark. However, after licking out the bowl, my housemates can testify that it still tasted delicious!!

To assemble the cake I decided to sandwich the chocolate layer between the two strawberry ones. In between the layers, I spread on strawberry jam and sliced up the rest of the strawberries from the punnet I had bought and put them in between as well.

I then covered the cake in the ganache which had increased so much in volume that I actually had some left over and was able to pipe some flowers round the edge (I was rather proud of them – my piping skills are improving slowly but surely, Ruth’s lessons are paying off!).

I piled the chocolate covered strawberries on top and grated over a variety of milk, dark and white chocolate for the finishing touch.

The cake was definitely appreciated by my housemates as we snuggled down in front of Made in Chelsea with a cup of coffee. Hopefully I will be able to send a piece off to Ruth (via her courier/husband) so she can try it too.

I shall let you all know how it gets on in the competition although I have to admit there are some quite scary cakes among the other entries!!
As our saying goes: Watch this space!

P.S. The apron was a birthday present from a friend – Ruth and Anna are both quite jealous, we may have to all get matching ones!!

One thought on “Strawberry and Chocolate Cake”