It was my birthday at the beginning of June and, having moved back home, Ruth is no longer in the vicinity so couldn’t provide me with a fabulous cake as she normally would. 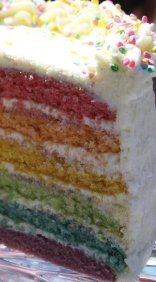 (Just a little reminder of the previous few!!)

Mum did ask what sort of cake I would like but as soon as I started describing it she point-blank refused to make it. So… I made my own (i have to admit, i was secretly quite pleased – it meant I could have exactly what I wanted).

I am all for making a cake that looks good but that is relatively easy to pull off, something that most people would be able to do without too much grief and stress.

Admittedly the flavouring of this cake was slightly less conventional and required some planning, but the decorating principles can be applied to any flavour or occasion.

I wanted to try to make an exotic flavoured cake and found a bottle of passion fruit cordial in the pantry (mum does sometimes keep a rather random selection of goodies) which gave me the initial inspiration as to what i would do.

For the white chocolate layers I followed this recipe (without the raspberries) from the bbc good food website – it had a nice texture but lacked in flavour. It was very sweet but not really identifiable as white chocolate. In hindsight I should have just made passion fruit flavoured cakes and missed out the white chocolate all together.

For the passion fruit cake, I followed Mary Berry’s victoria sponge recipce but added passion fruit essence which i bought here. When making a cake using such a subtle flavour, the easiest way to make a powerful impact is by using an intense flavouring – baking tends to dampen flavours and you would have to use so much real passion fruit juice that the batter would become too runny and the cake would not rise.

I then devised a recipe for passion fruit filling.

For this I bought a carton of rubicon passion fruit juice and used cornflour to thicken it, it was a bit of a cross between a curd and a custard.

Mix the cornflour into a small quantity of passion fruit juice (enough to ‘dissolve’ it with no lumps)
Whisk the egg yolk into the remaining passion fruit juice
Heat the juice and egg mixture over a low hear, whisking all the time
When it is hot, pour in the cornflour and continue whisking
Cook for 2 mins, whisking continually
Pour into a bowl and cover the surface with cling film then leave to cool

I then had 2 eight inch white chocolate cakes and 2 passion fruit flavoured cakes.When they were cooled I cut them all in half to give me 8 layers, I decided that layering 6 of these would give an appropriately sized cake. I used the left over passion fruit juice to drizzle over the cakes. Whenever possible I try to think of something that will help to keep the cakes moist, they dry out less quickly meaning they last longer ~(not that this is ever really an issue in my house…). I then layered the two sorts of cake alternately, filling with both the cooled passion fruit filling and the passion fruit buttercream.

Finalllllyy for the decoration. This really was very simple but looked incredibly effective – i would recommend it to any novice cake decorators.

Firstly, I stuck chocolate fingers round the edge of the cake. Make sure you buy enough so that they touch all the way around otherwise the overall effect can be a bit messy. I think I used about 4 boxes to cover an eight inch cake.

You can also use twirls as seen on this cake we made for Anna, 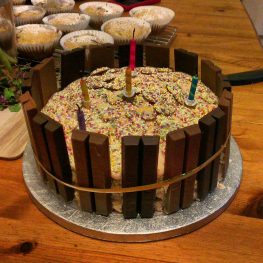 …or any other neat looking chocolate bar.

I tied a ribbon round the edge to keep the fingers in place.

Top tip: use pins to secure the ribbon in place! (But don’t forget you put them there otherwise you can end up pricking yourself and yelping rather embarrassingly in the middle of a full restaurant… but we don’t need to go into that)

I stole Ruth’s idea from above and put raspberries in a ring on the top. I could have done this over the whole of the cake, as you can see it gives an easy but very pretty finish. However, I wanted to do something a little different. So…. I scooped out the flesh and juice of 6 passion fruit. I then strained the pips and put the juice in a pan with a little arrowroot (a thickener rather like cornflour but that leaves your liquid clear rather than going cloudy). This causes the juice to go thick, jelly like and a bit sticky. I added the pips back in and poured it into the middle of the raspberries. You need to add enough arrowroot to make the passion fruit viscous enough that it will not slide off into the raspberries but stay together in the middle. 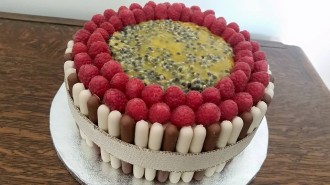 I had a lovely meal at a local Italian with my parents and my friend who was visiting from Mexico and the cake was a hit. The raspberries were a good addition because the cake was very sweet so it cut through somewhat.

We have a lot of cakes to blog about so keep checking for updates – hopefully with the summer holidays round the corner we will manage to do a bit of catching up.

Here are a few piccys to get you all excited: 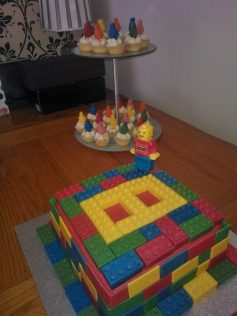 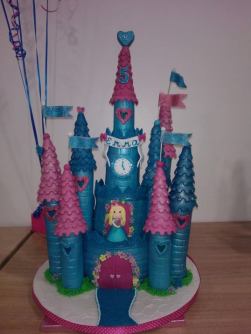 One thought on “White Chocolate and Passionfruit Cake”