Apologies for the absence of posts, motherhood, teaching and university have respectively left little time for blog posts!

I thought I’d share some of the baking I’ve done throughout the past year. It’s been my third year of university which means one thing: lots of 21st birthdays! And this, of course, means lots of cake. I live in a house of seven girls so it’s been a very fun year of baking.

We’ll go chronologically through this year of birthday cakes starting off with one from October 2016.

For this cake I used the chocolate cake recipe.

I only did two layers and to finish it I put chocolate fingers around the outside; I had to buy two packets. You need to ensure you do this whist the icing is still slightly soft, so that they’ll stick. I secured them with a ribbon. I used smarties for the 21 on the top, in a rainbow pattern that matched the candles.

Victoria Sponge, for a pink and sparkly classy lady, Nov ’16

This cake was for my housemate who is loves all things pink, 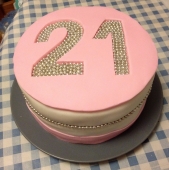 sparkly and is notoriously put-together, always putting the rest of us to shame. I knew this one had to involve pink and have clean lines, and in general be a classy cake.

I used the Victoria Sponge recipe but I made three cakes (to do this divide the ingredient amounts by two then multiply by three).

I made the basic buttercream and put homemade raspberry jam (courtesy of another housemate) and buttercream between the layers and then buttercream all round the outside and top, taking care to level the top as well as possible, as fondant can be unforgiving.

I rolled out white fondant icing and covered the whole cake in it. A couple of tips for rolling out fondant are:

I decided to stay in keeping with clean lines and classiness I would make a fondant plaque to go on top.

I dyed some fondant pink with gel icing colours like these and rolled it out. I measured the diameter of the cake and then cut out the circle, by eye, with a knife, but you could definitely make a template which would be easier.

I placed my plaque on top of the cake and then cut out the 21, but only from the pink icing, leaving the white underneath. I also did this by eye, but again it would be safer to make a template that you’re happy with. I filled the 21 with small silver sugar balls to add a bit of sparkle.

To finish, I put a pink ribbon of thin pink fondant to hide some of the messiness at the base. I thought the all white sides looked a bit empty so I put on the ring of silver balls. Once I was finished, I really didn’t want to put candles in the cake because I felt they’d ruin the aesthetic, so I stuck them in some fondant on the plate, which is a really neat trick!

This one’s theme was glitter so I bought two things: an iridescent silver shimmer spray and a sliver glitter spray.

After putting white fondant on the cake, I first of all sprayed it with the shimmer spray. 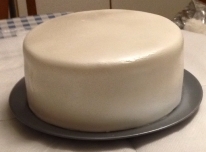 The result wasn’t as sparkly as I was anticipating, definitely a shimmer not a sparkle. I then decided to do a swirly design all over the cake using a cake decorating tool set I got from Morrisons. Making the first mark was possibly scarier than

some of my exams this year, but I did the design freehand with a series of swirls, dots and silver sugar balls.

To finish the cake, I used the glitter spray to fill in some of the bits of the swirly design, covering the bits I didn’t want glittery with kitchen roll. It was a slightly imprecise art, but worked reasonably well. Some silver candles finished off the cake beautifully and it all made for a very happy birthday!

This was a special request from my housemate, a cake that her mum had made before, so I felt I had quite a lot to live up to! I followed the recipe which you can find here.

I didn’t have a large deep tin so I did it as two 8″ cakes, which made it turn out with a lighter cake texture, rather than a gooey pudding texture which is what it may do if you used a single tin.

I kept this cake quite simple as the taste was everything, so I didn’t want to take away from it. I just added some grated chocolate and 21 in giant white chocolate buttons.

Once again I made a chocolate cake, making three tiers instead of two.

To make the piñata aspect, I removed around 2/3 of the diameter of the bottom two from the middle of the cake, using a mug as a guide to cut it out. I then layered these two bottom layers and then put lots of mini creme eggs into the hole, as I knew that creme eggs were my friends favourite. Then I put the final cake which was still complete on top, hiding the surprise in the middle!

I iced the whole of the outside with the fudge icing in the chocolate cake recipe, and then put fudge bars around the outside, and wrapped 4 thin blue ribbons around the cake.

I picked out the blue smarties from several packets and did a small, neat 21 on the top. I wanted the outside to be sleek and simple so that the surprise in the middle was even greater!

So that’s it! A year of the birthday cakes I’ve made. It’s been a wonderful year, and these cakes are all totally manageable for anyone to make (I’d never iced a cake in fondant before I did these, or made a three tier cake), and are all effective visually, and more importantly, tasty!

One thought on “A Year of Birthdays”