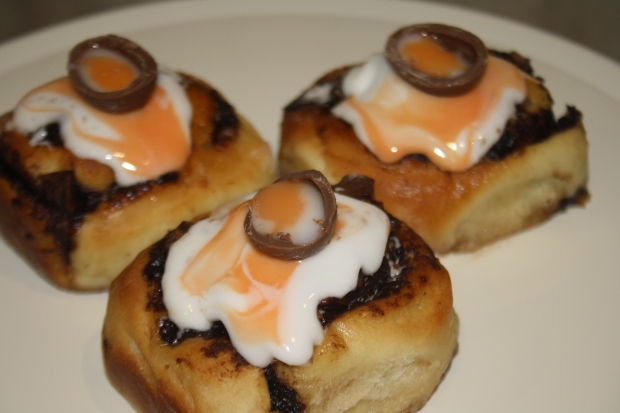 Did any of you catch the #CremeEggBake competition that was advertised recently? Cadburys were looking for people to come up with new ways of baking with the creme egg, something to follow in the footsteps of the now renowned creme egg brownies, invented by Eric Lanlard (cue swoon). Lizzy entered the competition and won a google hangout with the very man himself (sooo envious). Eric recreated her recipe, a creme egg chocolate tart. If you missed it, you can catch up on you tube here and see our very own Lizzy in action.

Last month was a very busy month, so I didn’t get a chance to experiment with a creme egg bake in time to enter the competition. However, this did not stop my mind racing, contemplating all the possibilities. Recently, I’ve been trying out Chelsea buns, both baking and eating! Having never before properly delved into the world of enriched dough baking, I am now well and truly converted. They are remarkably easy to make, yet impressive and oh so tasty.

I was busy making a batch of the traditional cinnamon and fruit ones for a family gathering, when it struck me – a creme egg chelsea bun! The traditional ones are sticky with lashings of syrupy coating, but the bready base means they can take all the sugar without it being tooo tooth-achingly sweet. It dawned on me that creme eggs and chelsea buns could be the perfect pairing.

I searched the internet to see if such a thing already existed, but to no avail! So the experimentation began…….you saw it here first!

I have made these delectable, gooey treats several times now and they’re a roaring success. They would be a great addition to any Easter party and would definitely please guests who don’t like the traditional hot cross bun (although do such people really exist….?!), but make sure you have the napkins at the ready as they are very sticky!

I have played around with the recipe based on feedback people have given me each time. I’ve included my final version of the recipe at the bottom of the post, but, as always, this depends on personal preference. My husband prefers them without the added chocolatey paste in the middle, but Lizzy and I think they’re much better with it.

Note: You may notice throughout the post that some of the photos are of the buns with chocolate paste and chopped chocolate in the middle and some without the chocolate paste. I hope this doesn’t confuse you! Also, you could make your own creme egg fondant for the top of the chelsea bun and just use ordinary chocolate in the middle. Sticky pinny tells you how to make creme egg fondant in her creme egg cupcake blog post. However, Sainsburys were selling packs of 12 standard creme eggs for £4, which seemed reasonable enough, so that’s what I used. I encourage you to adapt the recipe as you see fit!

The first thing to do is to make the dough. It’s really simple, especially if you use a dough hook on your machine = no kneading! I find this works much better for me, because the dough is very sticky and messy. When kneading by hand, I end up adding a lot of additional flour, which risks making the buns dry. If you don’t have a dough hook (or if you’re more adept at kneading than I am) it works fine kneading by hand too – it’s just a bit messier.

Dough hook doing the hard work for me!

Kneading is finished when the dough is elastic, and comes away from the sides of the bowl (if using a dough hook). Pop the dough in an oiled bowl and cover with clingfilm to avoid a skin developing. Leave to prove until doubled in size. This will take at least an hour, but may take more if it’s not in a particularly warm place (up to 3 hours).

While the dough is proving, it’s important to get ready for the next step. You don’t want to roll out the dough only to realise you haven’t prepared the filling (yes this has happened to me).

Cut the creme eggs in half and scoop out the centres

Cut the 12 creme eggs in half, scoop out the fondant and keep them separate to one another, so you have 12 in total. I tried doing this both at room temperature and when they were cold. I found it slightly easier to scoop the fondant out at room temperature, but both ways seemed easy enough. I put the fondant centres onto a plate – bit of mistake! I should have put them onto greaseproof paper to make them easier to take off later. Chop up the creme egg chocolate into pieces, about the size of raisins. 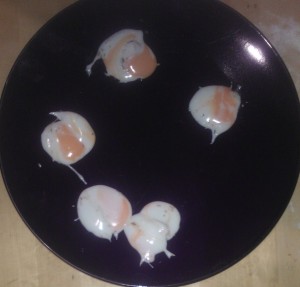 If you are using chocolate paste, make it at this stage, with softened butter, brown sugar and cocoa. 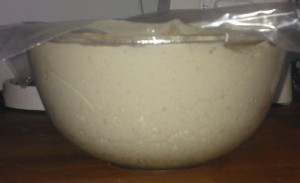 When the dough has proved, scoop it out of the bowl and shape it into a rectangle. Then roll out into a large rectangle on a well-floured surface. Tack one length of the rectangle down onto the table (nearest you). Spread the chocolate paste all over, using your fingers.

Sprinkle the creme egg chocolate over the top. Make sure you reserve the fondant centres for later. 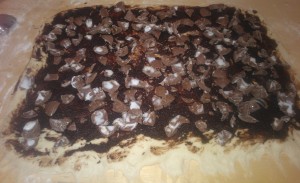 Roll the rectangle up tightly, finishing at the length you tacked to the table.

Cut into 12 sections and discard the 2 ends. (Paul Hollywood suggests 9, but I prefer the slightly smaller size – if you want to do 9 large ones, then you will only need to use 9 creme eggs).

Place in a baking tray, about 1cm apart, as they will grow again. 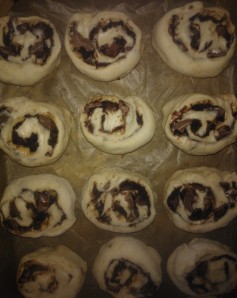 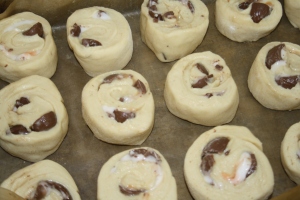 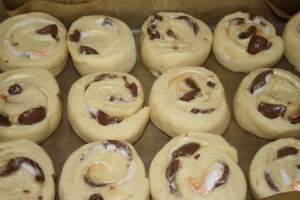 Leave to prove for another half an hour, and then bake in the oven.

Make sugar syrup, ready to pour over buns as soon as they come out of the oven. 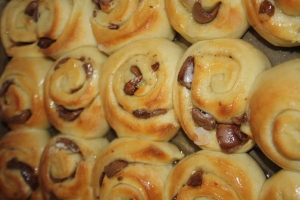 Leave to cool and then move onto a wire rack.

Put the fondant centres onto each bun, just shortly before serving. The fondant goes very runny and if you leave it for even just a few hours it will almost disappear (still tasty of course, but not so fun looking!). Don’t worry about being too neat as the fondant will start gliding down the sides in no time.

I did this using a spoon. On reflection (hindsight is a wonderful thing), if I had put them onto greaseproof paper in the first place, and popped them in the freezer, I could probably have just lifted them off really easily. 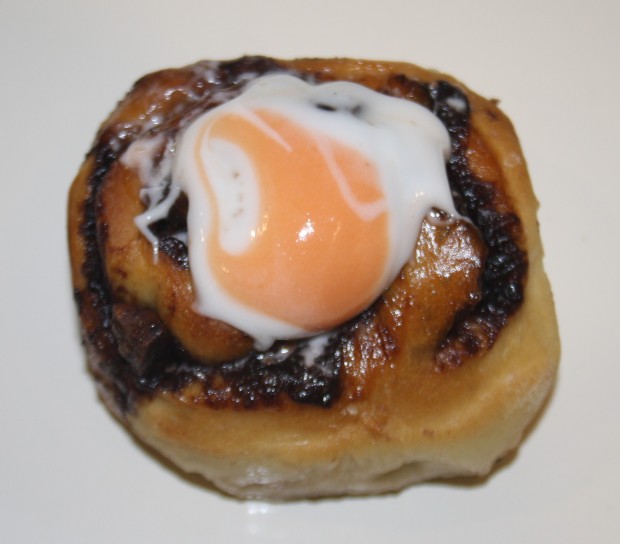 When you first put the fondant on, it won’t look like very much topping, don’t fret! The fondant oozes and glides down all the crevices fairly quickly.

Finish off with a halved mini creme egg on top, and you’re done! Eggs-ellent 😉

A soft, enriched bread rolled up with chocolatey paste and chocolate chunks, dripping with creme egg fondant and adorned with a halved mini creme egg.

For the filling
For the sugar syrup
To finish