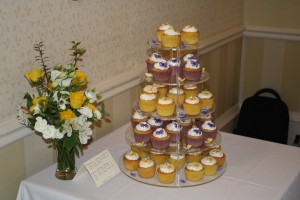 Sorry you haven’t heard from us in while. We’ve been on holiday – venturing far into the depths of the Yorkshire Dales where internet and mobile signal cease to exist. We have so much to update you on!!

At the end of July, we were lucky enough to be invited to our great aunts 90th birthday party, it was a lovely family get together. We offered to create a cupcake tower, our first since starting the blog! Ruth has taken on the feat a few times before, conjuring up creations for a Christening, a 60th, 18th and 1st birthdays.

We decided to keep it ‘simple’ with two flavours of cupcakes: Lemon and, Violet and Raspberry.

For the Lemon cakes we took the Basic Cupcake Recipe (multiplied it by a lot – enough to make 40) and added the zest of one lemon per batch of mixture. We also added some lemon extract for a flavour boost, seeing as we had some in the cupboard, but they would certainly still be delicious without. When they were cool we scooped out the inside and filled them with a generous amount of Ruth’s homemade lemon curd.

The Violet and Raspberry cakes were a vanilla sponge, the flavouring was in the extras. In the middle we put some of our mum’s homemade raspberry jam (soooo yummy, we felt honoured to have been given a jar!) and on top we did a violet flavoured icing.

Seeing as the majority of the guests were adults and, from experience (i.e. our mum and dad), are less fond of the very sweet traditional butter icing, we decided to use a Meringue icing. This involves taking egg whites, adding granulated sugar and whisking it in a bowl over a pan of boiling water. When the sugar has dissolved you know the egg whites are cooked/safe (about 5-8 minutes). Next you whisk them in the electric mixer until the mixture is completely cool and voluminous, as you would a meringue. Add the flavourings at the end.

We added lemon juice and lemon extract to one batch and a violet syrup to the other. When adding flavourings, it is best to do it to your own preferred taste, add it little by little and keep tasting/watching to check the consistency.

For the decorations we flavoured and coloured ready to roll regal icing, again with lemon extract and violet syrup. We cut out butterflies and rested them against the edge of a baking tray to try and give them some shape. We dusted them with edible paint (normally you would add a spirit and make it into a liquid paint but we found that this gave a more subtle colour, more pastely to fit in with the colour of the cases and icing).

We also crystallised some lemon zest as described in Mary Berry’s Easter Pavalova.

We made the cakes the day before and did encounter a few problems. The Meringue icing did not last very well overnight, it tasted lovely but fell slightly flat. Also the butterflies did not hold their shape, the moisture from the icing caused the butterflies to moisten up again instead of staying hard. This isn’t usually a problem if you use a normal butter icing because it crusts. Problems do arise when you try out different things – it’s all a learning process!

They went down very well with the guests – catering for our first event together was a success!

We’ve got lots of blogs to catch up on – look out for toy story themed madness and giant cookies!!

P.S Exciting news, Ruth won a competition and has only gone and received a hamper full of baking goodies courtesy of Tate and Lyle!